To commemorate the reprint of "Animal Farm" from Chikuma Bunko of Chikuma Shobo,
A large set of animal characters from Shotaro Ishinomori are picked up from the work!
If you have an animal that interests you, please read it!

This is a manga based on George Orwell's masterpiece novel "Animal Farm".It is an ambitious work that promotes allegoricalness with a more caricature-like expression and movement in the original attempt to draw totalitarianism and dictatorship with pigs and horses as characters. In this reprint at Chikuma Bunko, we also recorded two episodes of Sakai Komatsu's "Kudannoha" and "Karan Kolone" with "Kaidan Botan Lantern" as a motif. 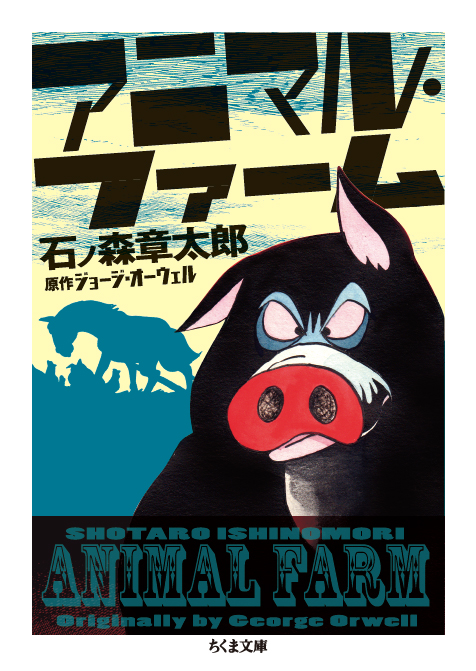 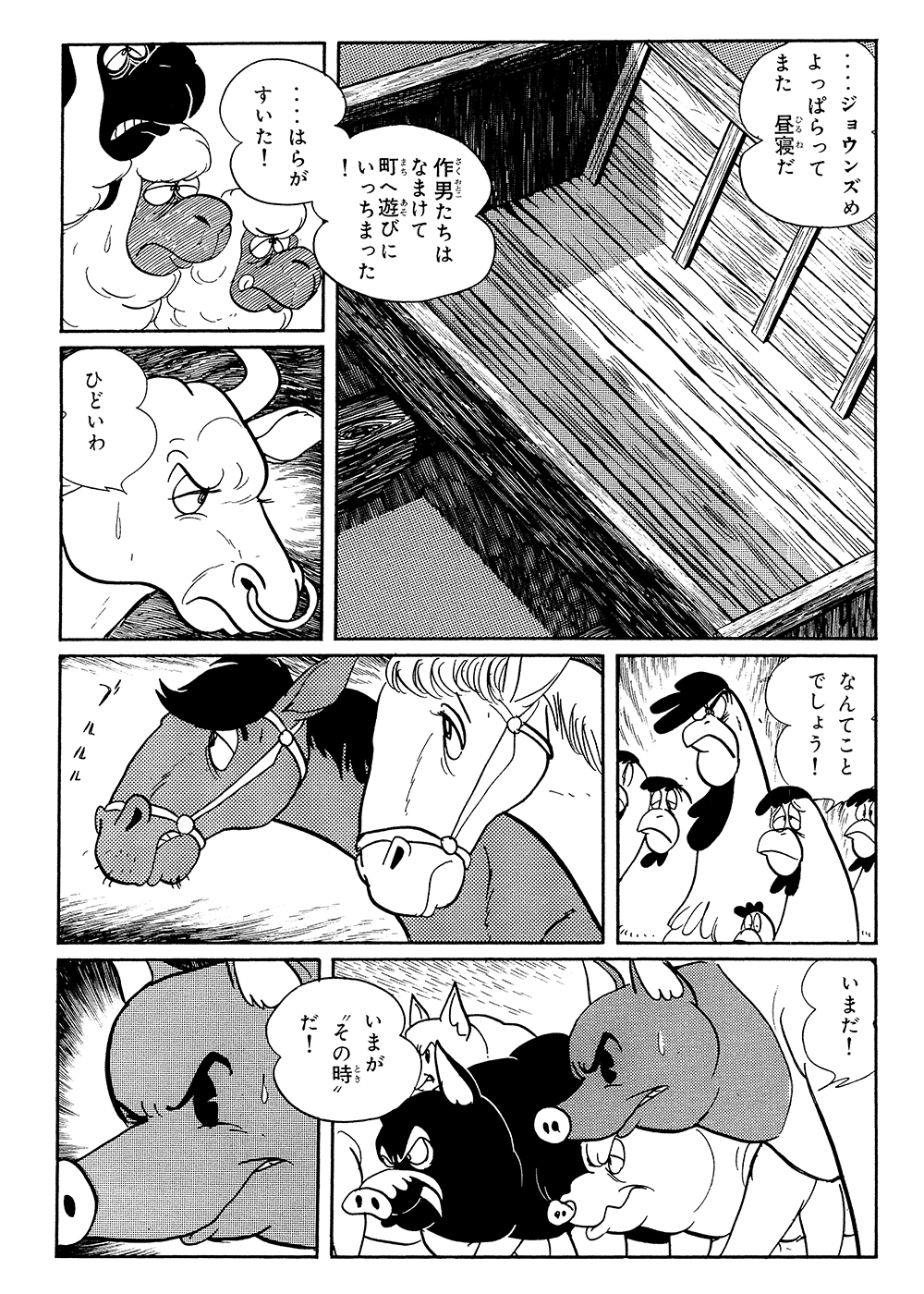 Ishinomori has been painting many animals before his professional debut.
From a realistic touch to a deformed picture like a picture book, caricature touch or Disney touch,You can see various types of animal paintings as if you were experimenting. You may not have that kind of image,I think he liked drawing animals. In the doujinshi "One Drop of Ink Juice," Son Goku explores the continent of Africa,We have released a caricature called "Crazy Animals", an illustration series that anthropomorphizes animals.
After the debut, there are many opportunities for animals to appear, and I think there are many works that use animals as their main characters. 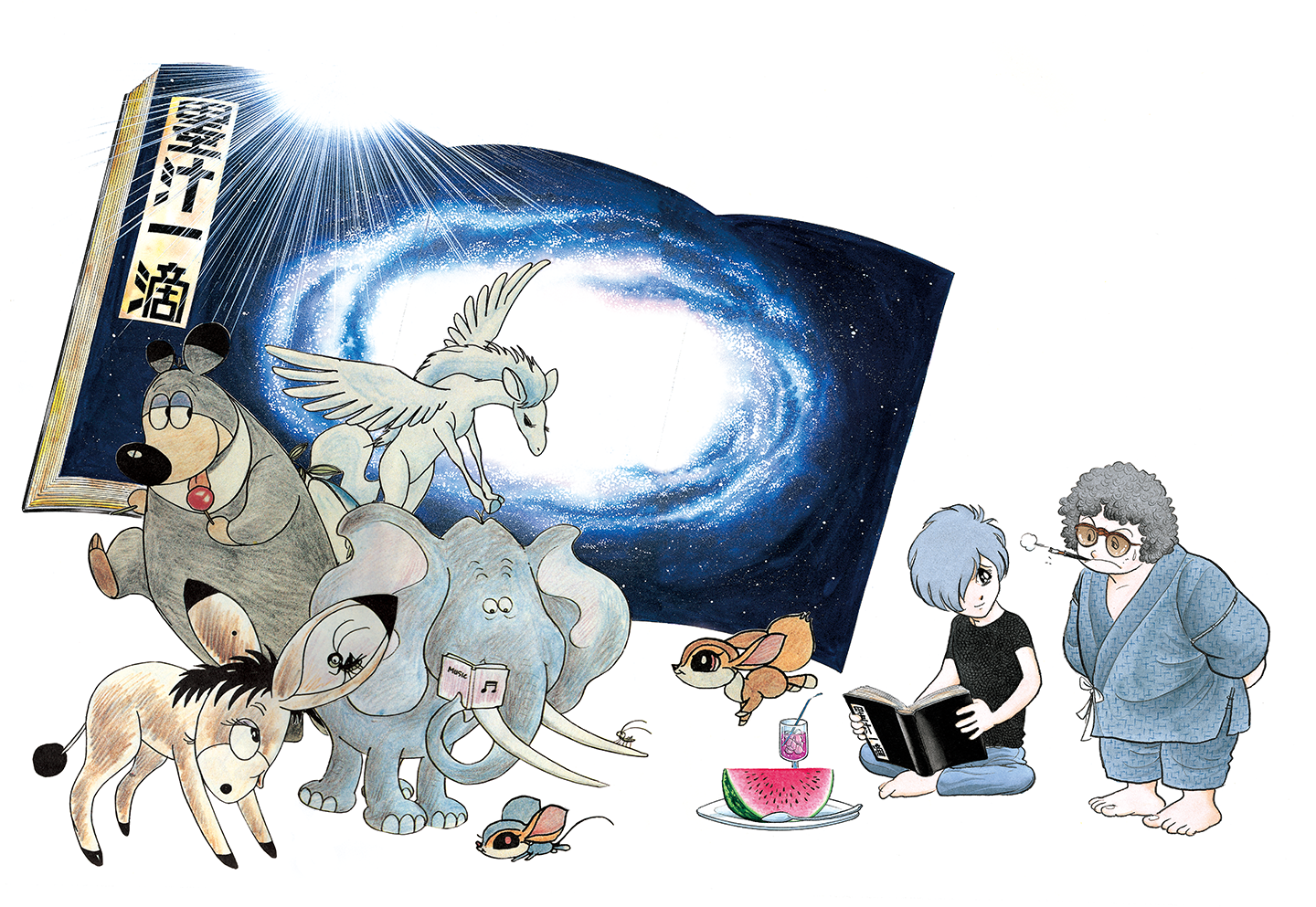 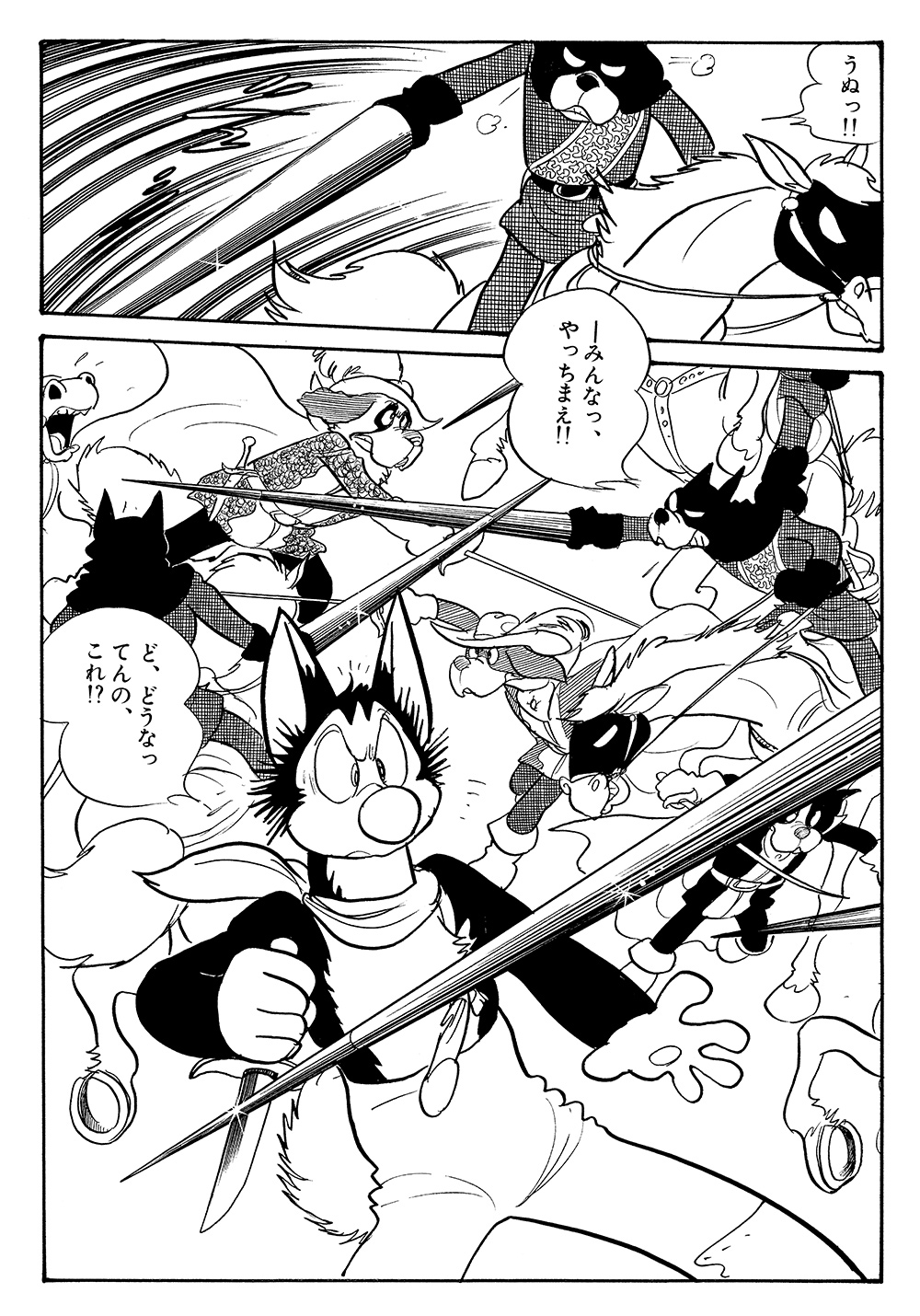 "Weekly Shonen Sunday" (Shogakukan) serialized from No. 35 in 1976 to No. 18 in 1977.
After the human race overwhelmed its scientific power and destroyed it, the earth became a world ruled by dogs. Shiba, a dog who dreams of being a swordsman, meets "Hitto", the lost husband, and embarks on a journey into the mysteries of the world. A large-scale fantasy in which only animals appear. 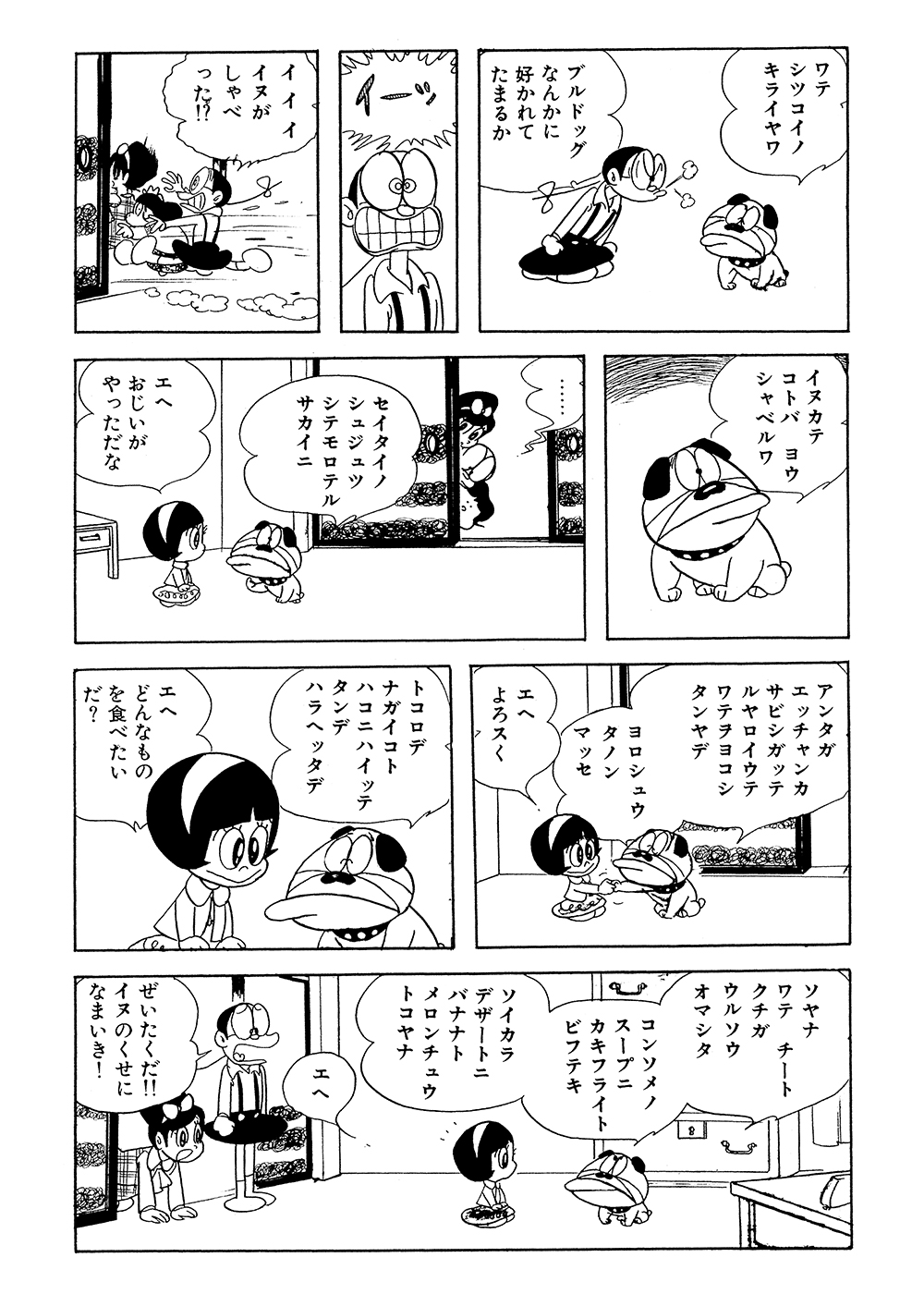 Published in several magazines from 1964 to 1972.
It seems that Buk is a bulldog who is always with Ecchan as a pet with mysterious abilities, but it actually appeared more than a year and a half after the series started. It was a Christmas present from my parents and grandfather who worried that I lived lonely. After that, he will not leave Ecchi-chan's side for a while, and he will be a famous role to follow with a blurry Osaka dialect. When it comes to animal characters in Ishinomori's work, I think many people first recall Buku. 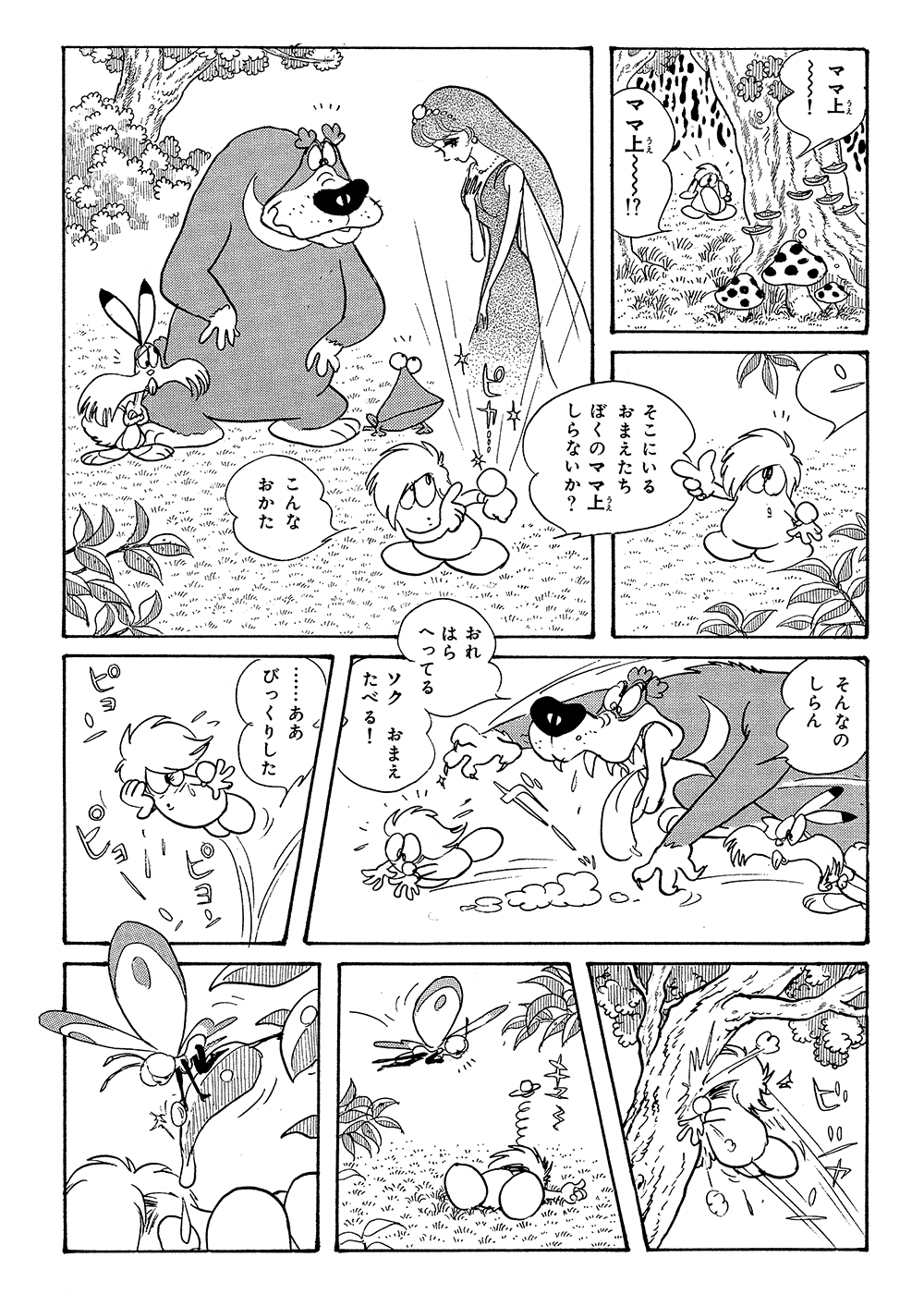 "Weekly Shoujo Friend" (Kodansha) serialized from No. 14 to No. 27 in 1974. Chobin is the prince of Fairlister who came to the earth following Mom. The place that fell on the earth was the Tonkara Forest, so we are on good terms with animals. A popular work in anime. Included in the complete set "Chanchiki Gappa 2". 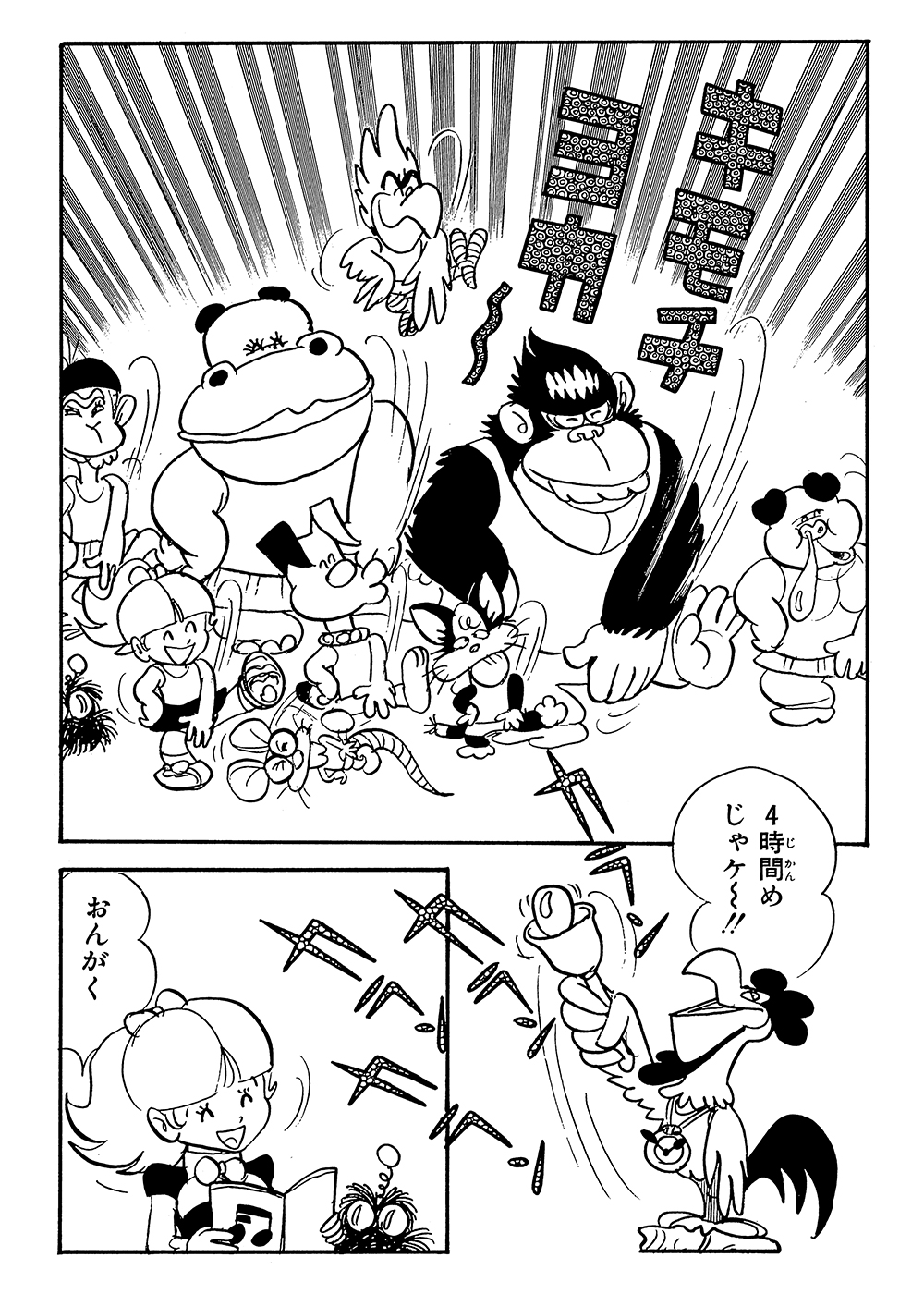 "Monthly 100 Ten Comics" (Futabasha) serialized from May 1982 to February 1983.
This is also a work in which only animals appear. A very hard setting, where a mother of a scientist who revived a dying daughter in an accident by cyborg surgery lives with her in the Kakure Valley where an anthropomorphic experiment is conducted to bring an animal closer to a human. However, Chome-chan and the slapsticks of the animals who live freely are fun. 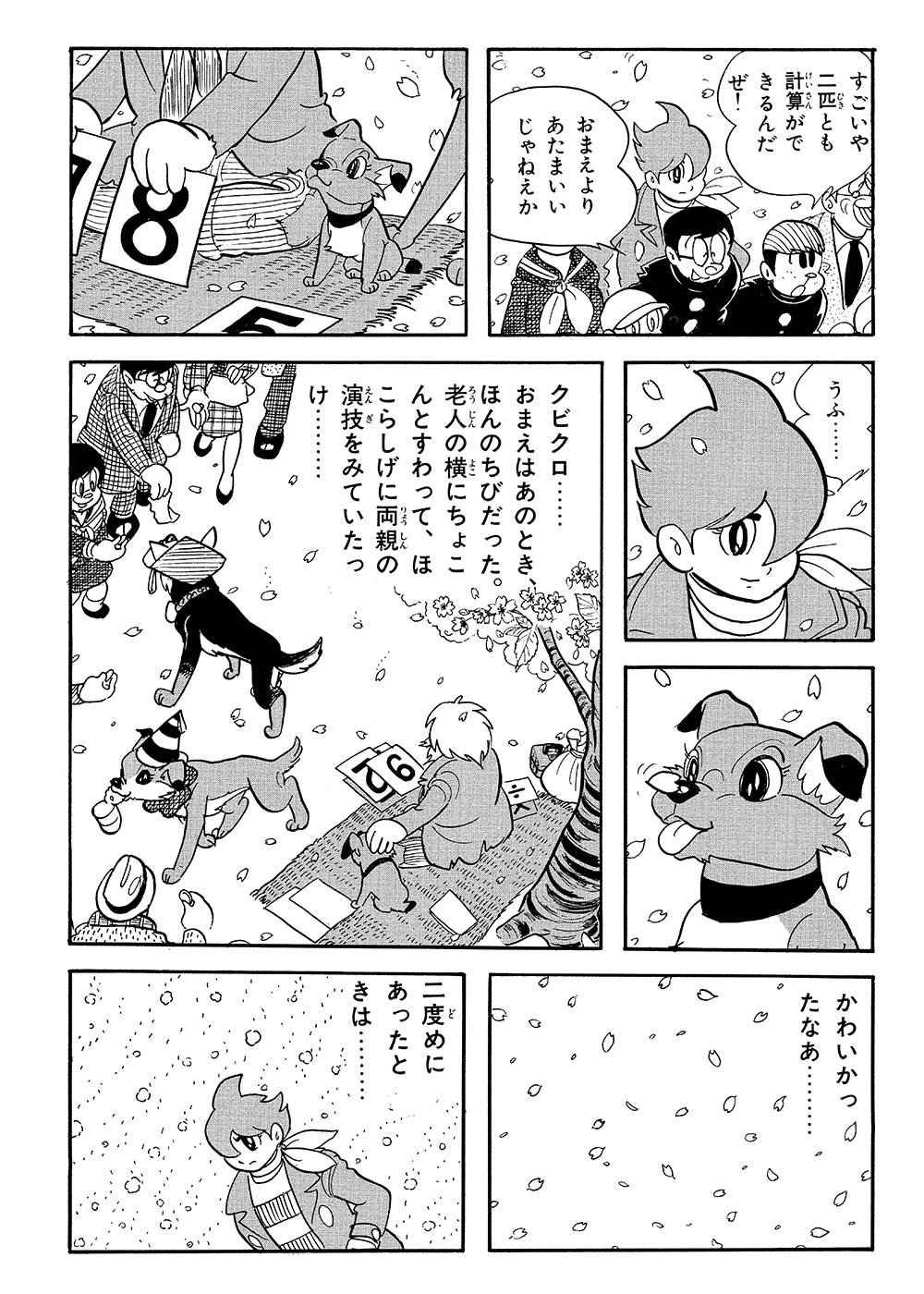 "Separate Volume Shonen King" (Shonen Gaho-sha) February 1966 issue.
The animal character in the "009" series is Kubikuro. The dog Kubikuro picked up by Joe was actually a super dog with brain surgery and abnormal intelligence and abnormal ability. Joe has no choice but to chase Kubikuro who attacks people with the power of hatred. A short story that is said to be one of the best masterpieces. 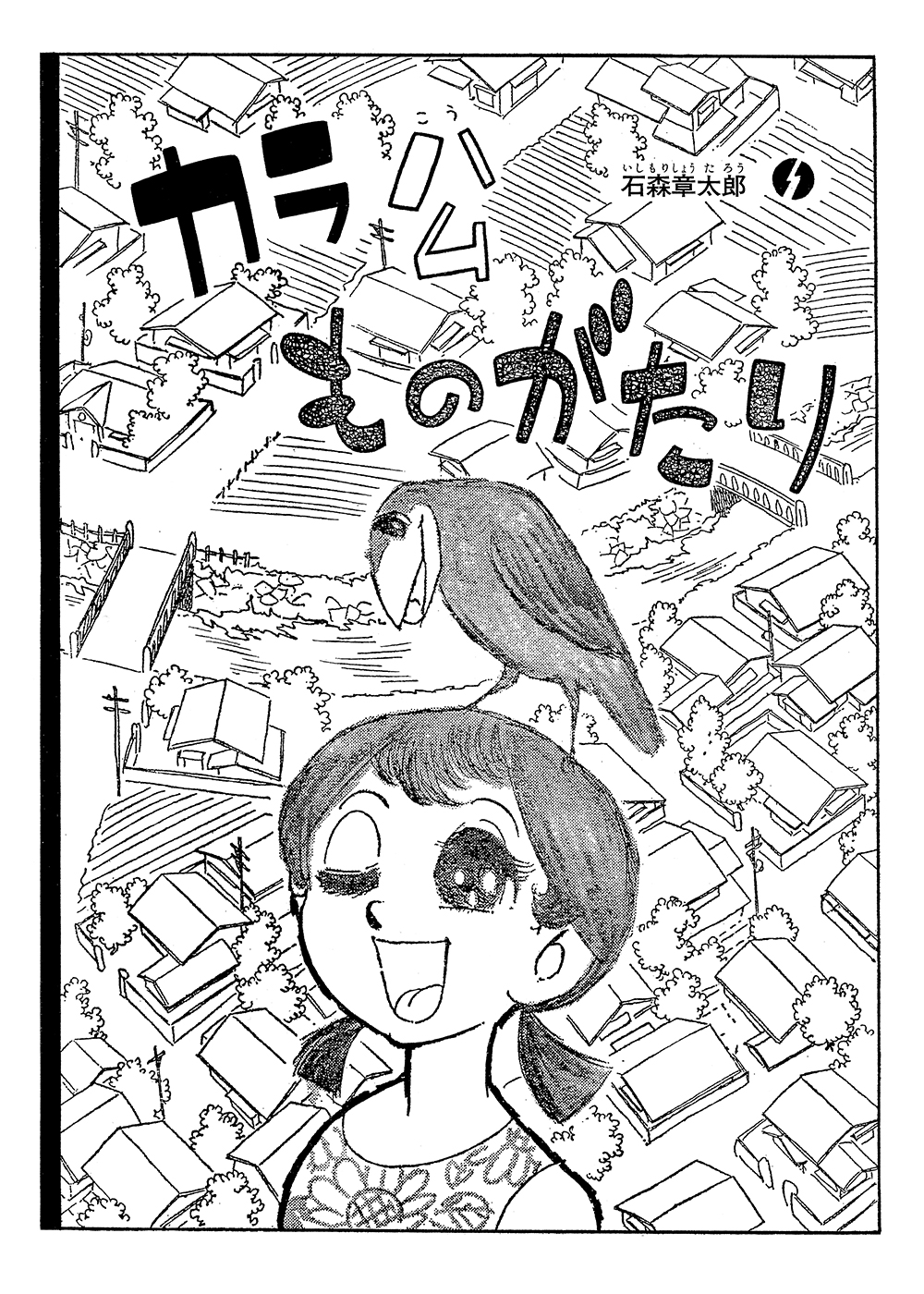 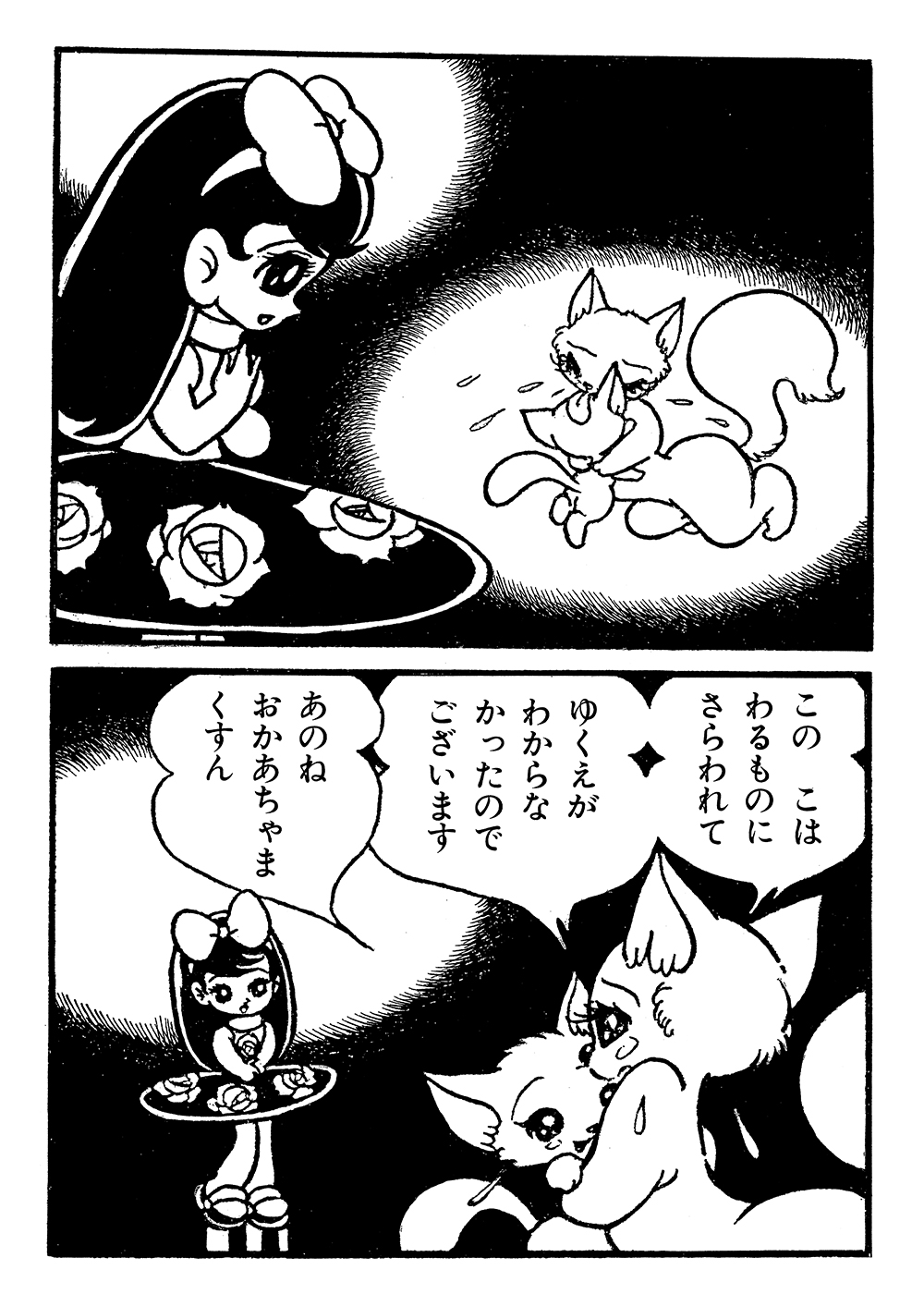 Miko and her cat 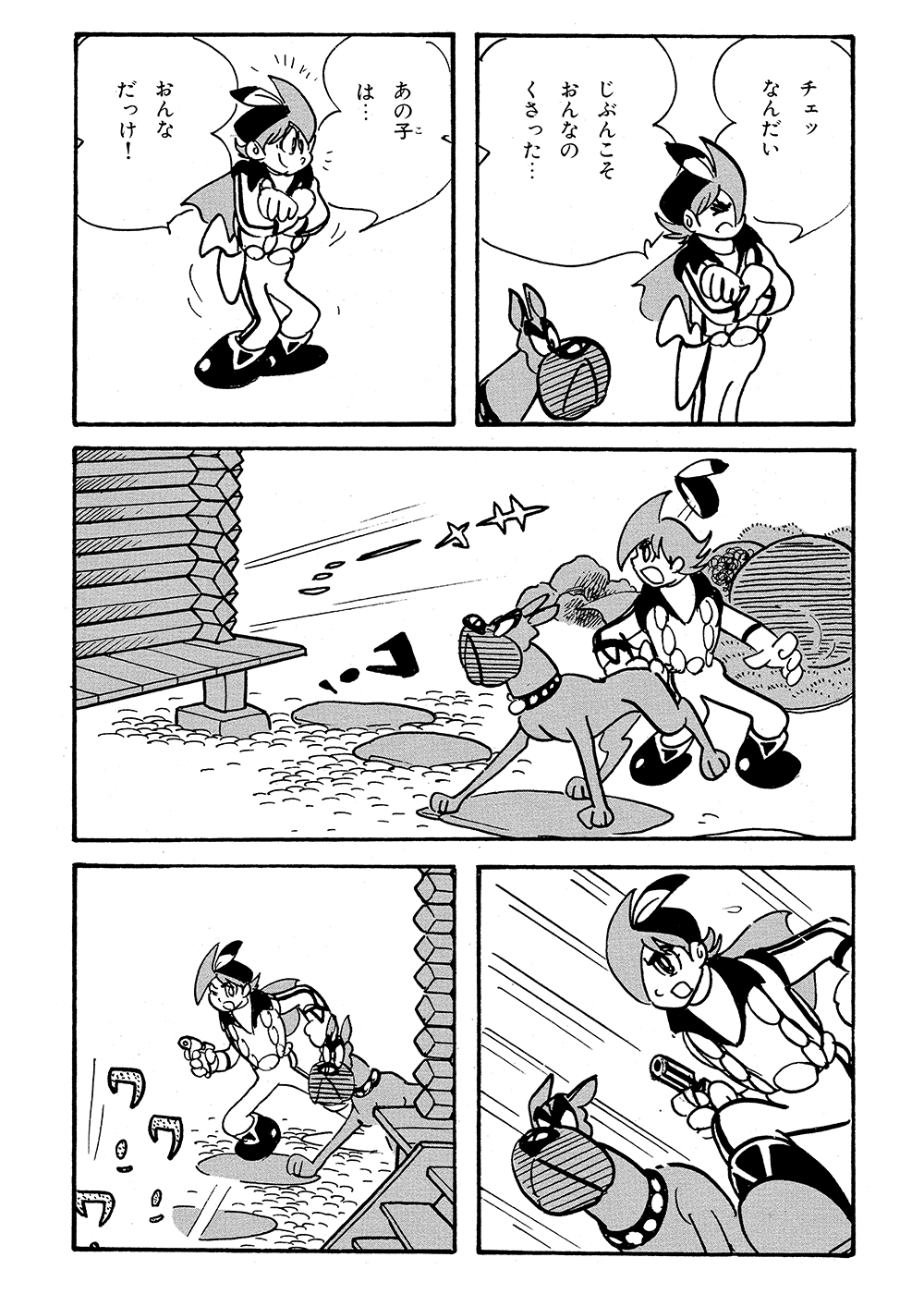 "Adventure King" (Akita Shoten) serialized in 1965.
Alphabet Squadron V, which is composed only of androids of the Space Secret Police Corps, solves various cases with the cooperation of the mysterious luminous life Pepel. A great hound dog, Robo, plays an active role as a companion. Robo also lends a body to the space life form Moko and always helps V. 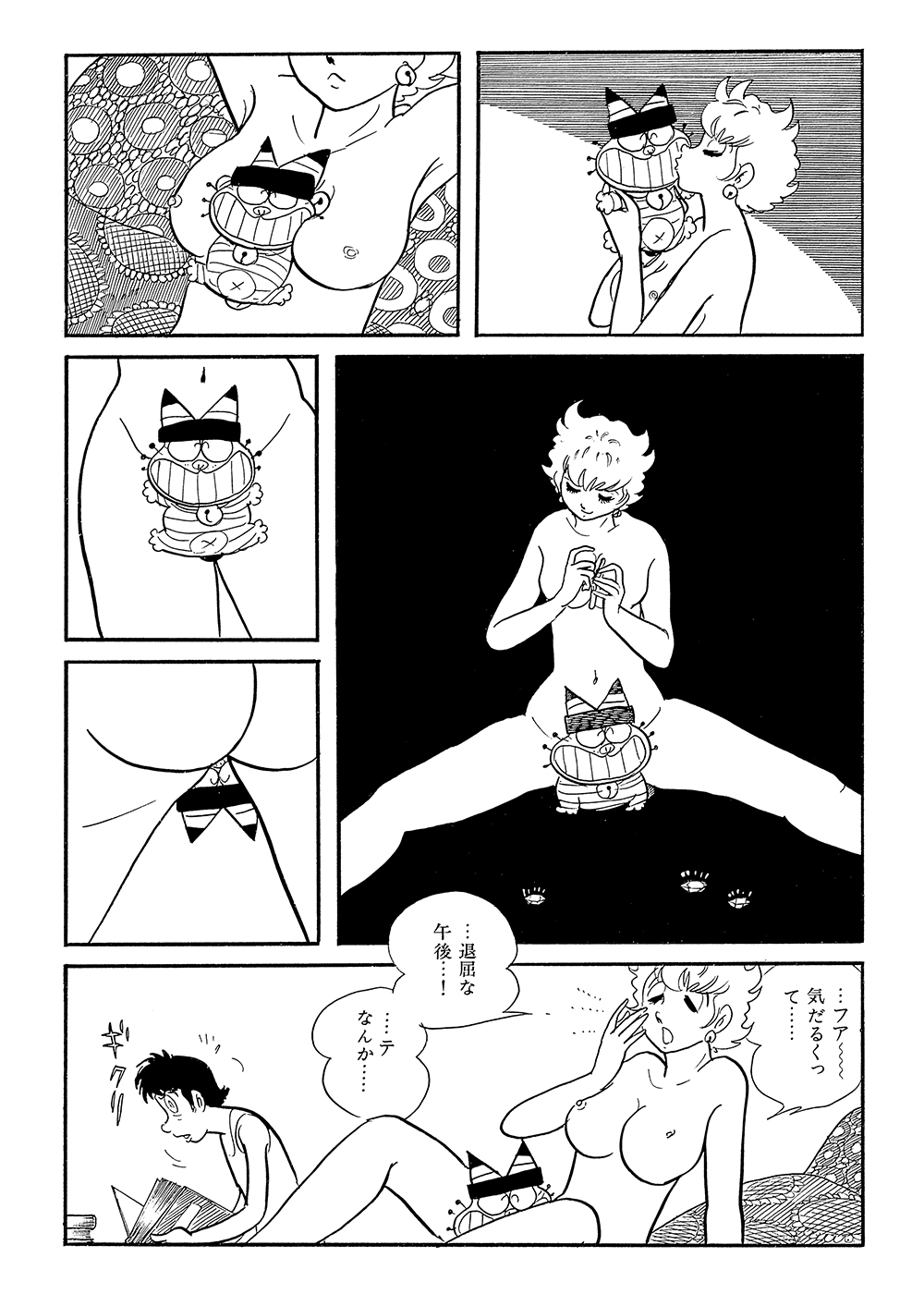 Serialized in the "Play Comic" (Akita Shoten) from January 12, 1974 to December 28, 1974.
From the future, a beautiful ghost thief, Bell, who spends time and space on his crotch, and a little comedy of Furu Arai, who somehow liked Bell. The ancient cat, the Cheshire cat, was made to be able to speak freely by Bell's automatic translation machine, and it helped to insert cynical glove.

It was drawn for use in the drama "Onion Muitara" that was broadcast on TBS from April 1981. It is set by Takuya Fujioka, who was drawn by Tsuruguro Oguni, a great manga artist who plays.
It's a story that the main character, Riko, is going to train a sexual warrior, but for some reason only Riko is a human, and all the other characters he meets in the city are animals.

Published in the June 8, 1978 issue of "Big Gold" (Shogakukan).
This is a project by Ishinomori, who has been working for 20 years, on the "animal picture book" that was drawn with the members of Tokiwaso in "Manga Shonen". You can tell that Ishinomori enjoys drawing such as puns and satire.
Included in Daizenshu "7P". 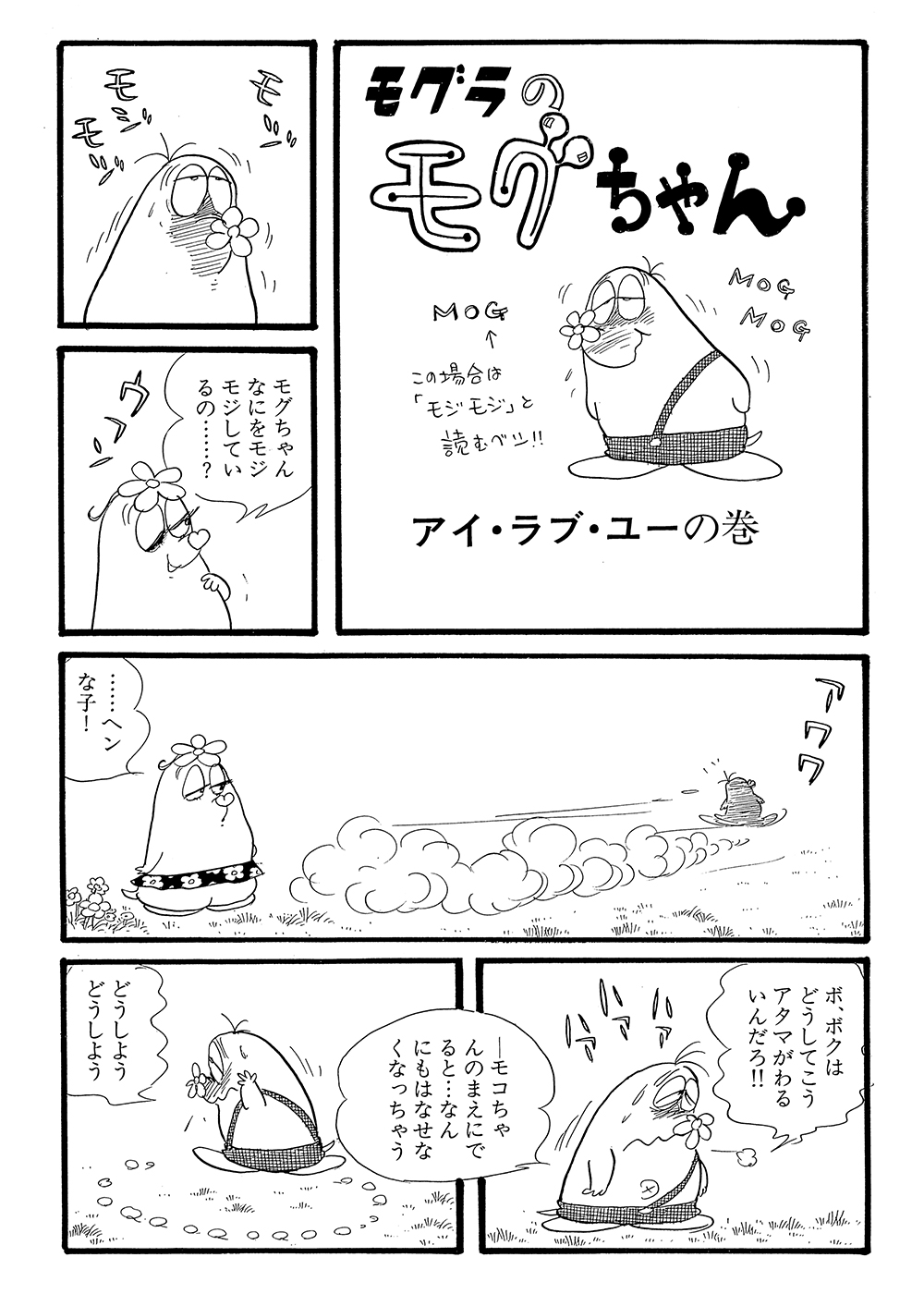 Around May 1975, it was drawn as a tie-up project with Kanebo Foods and appeared in magazines such as "Shonen Magazine", "Shonen Sunday" and "Shonen Champion". Mogo-chan, who struggles to convey love to Moko-chan, a female mole, is cute.
Included in the complete work "Underwater 30,000 miles". 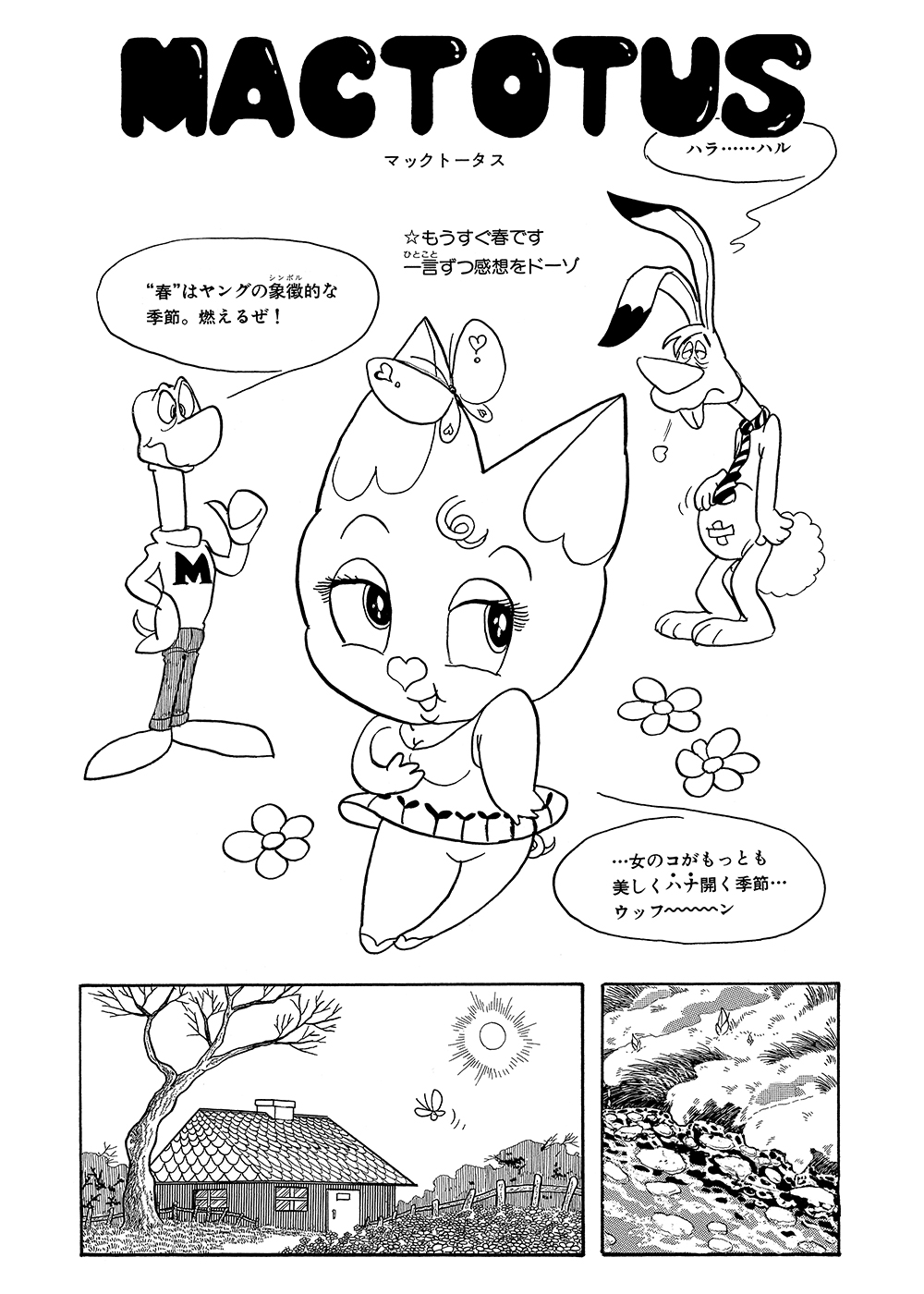 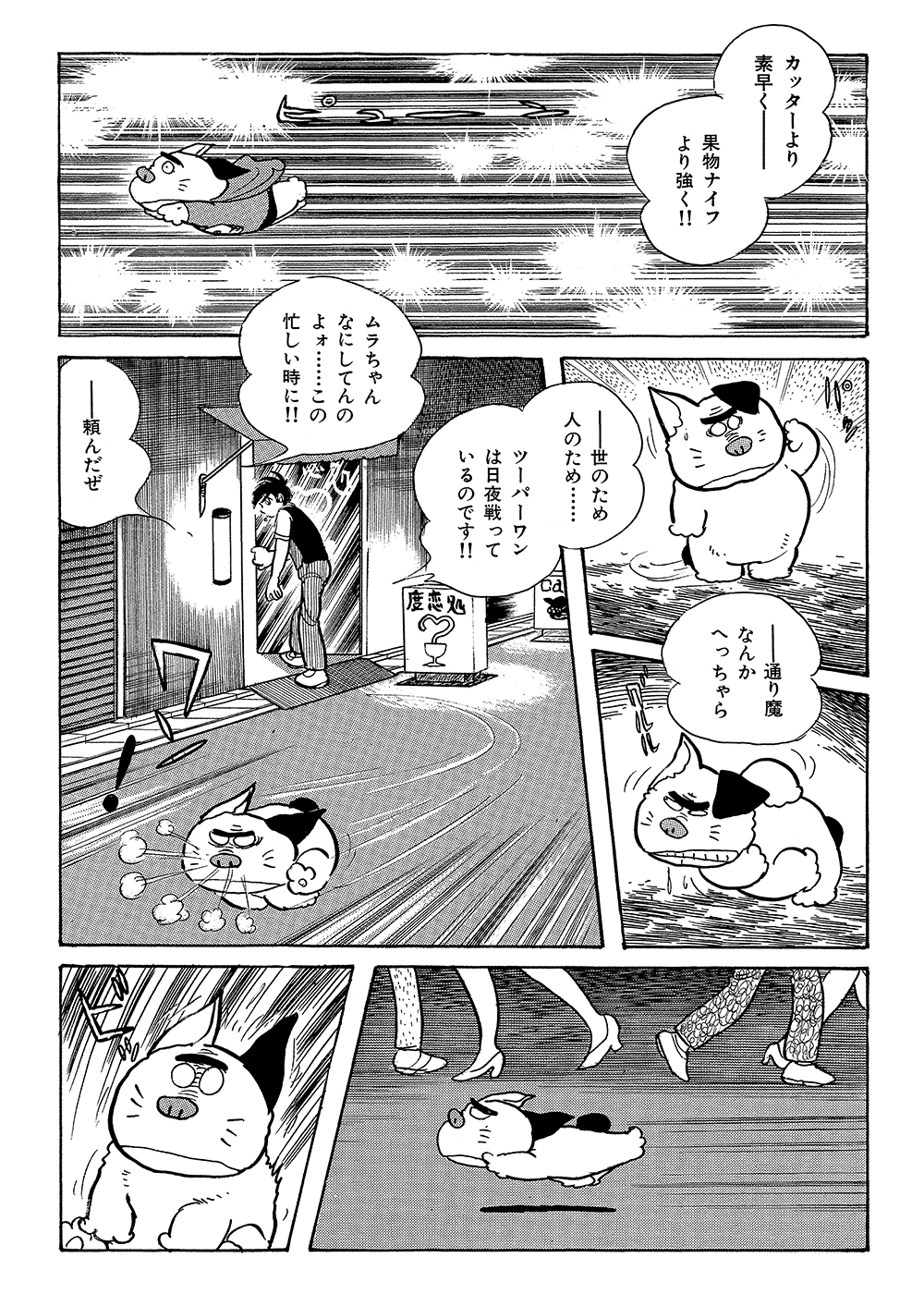 "Play Comic" (Akita Shoten) serialized from January 10, 1980 to December 10, 1981.
The story of an adult at night set in the snack “Kotokorekoro”, a snack where Ryo Murasame, who can use a little supernatural power, works as a bartender. Muraame, who appeared in the 32nd episode "Inu to Owarisan", was planted with supernatural powers and was given the name "Two-per-one". Ishinomori seems to like this dog and will appear in other works after this. 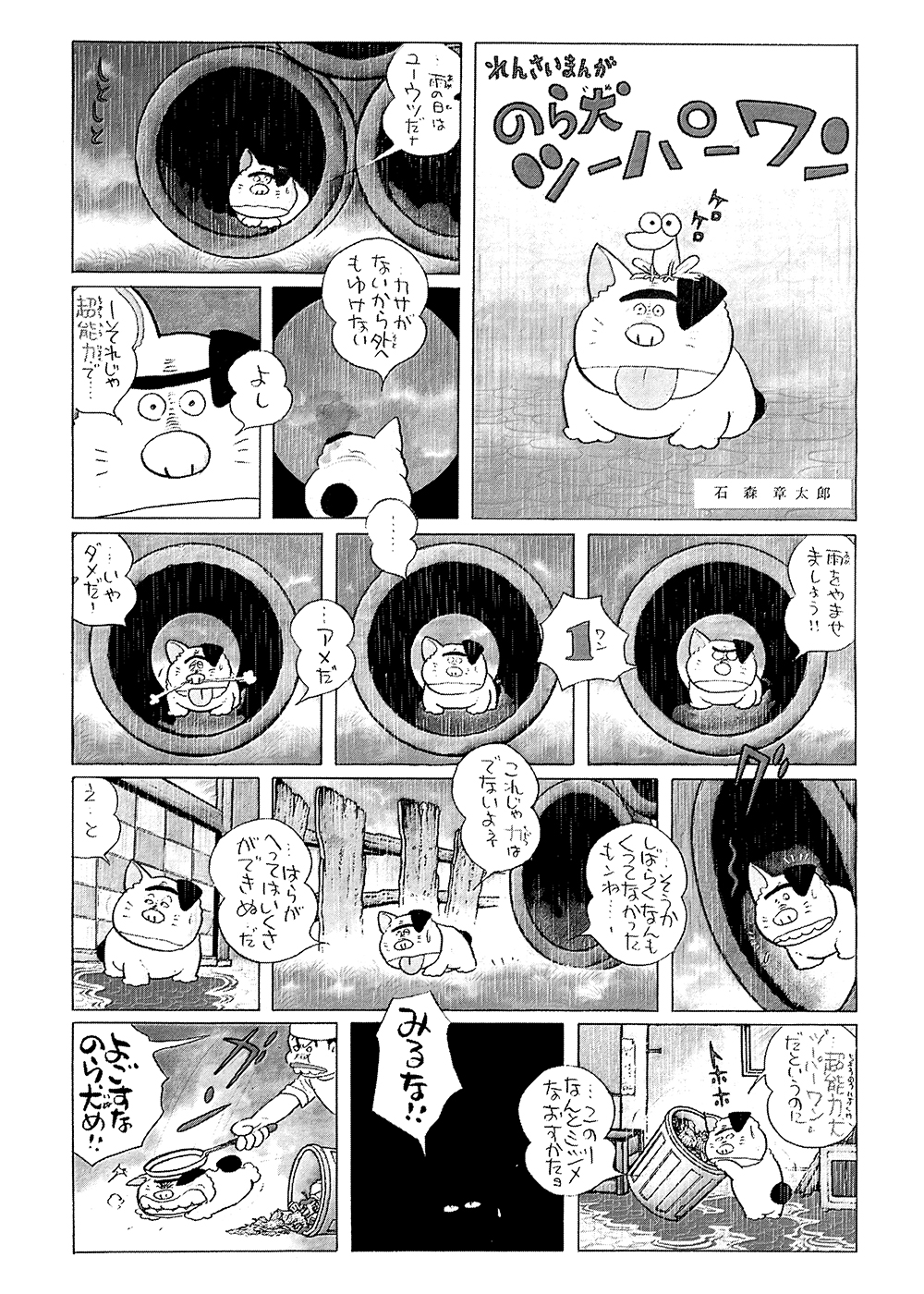 "Mainichi Elementary School Newspaper" (Mainichi Newspaper) Serialized from 1982 to 1992.
A color manga whose main character is the two-person one that appeared in "Knight and N da." With the same settings, the dog's two-per-one who has psychic powers will survive steadily with his trivial psychic powers. 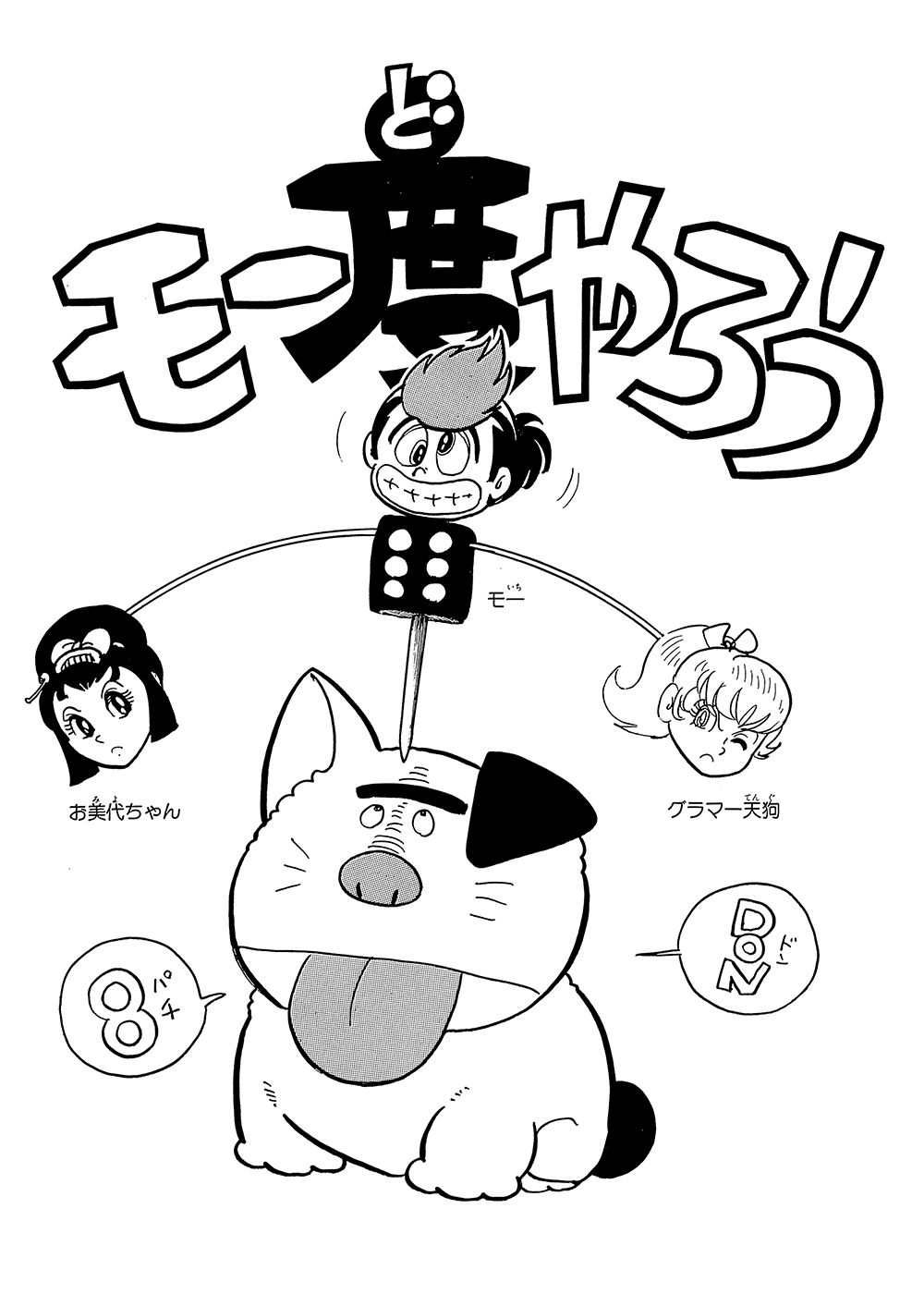 Let's do it once.

In "Weekly Shonen King" (Shonen Gaho-sha), serialized from the 4/5 merger issue to the 22nd issue in 1982.
Mochi is a historical comedy that involves Ryoma Sakamoto and Shinsengumi in the turmoil with various inventions set in Kyoto at the end of the Edo period, but Two-Pier One is also here as a companion to Moichi. 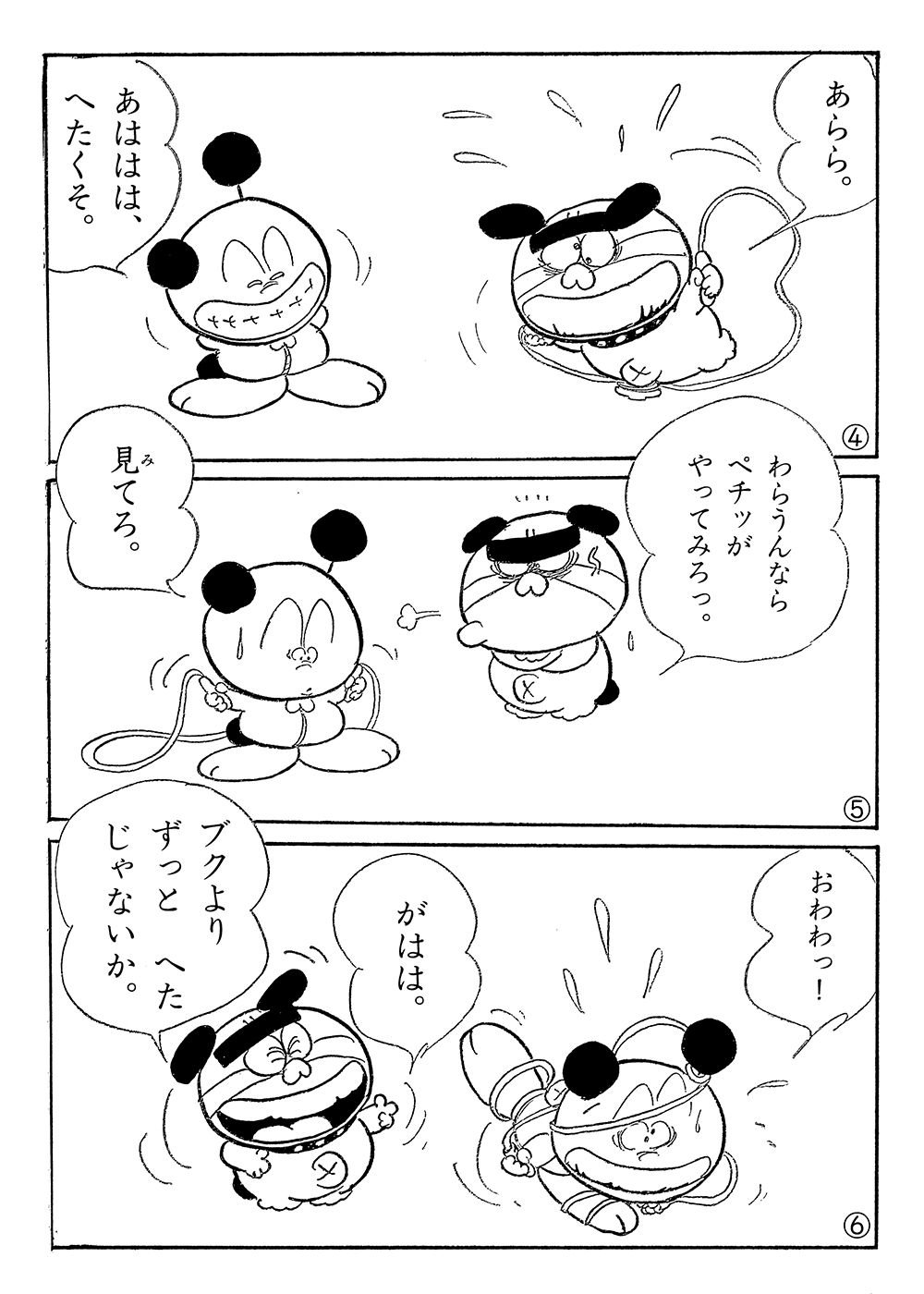 From 1982 to 1984, serialized in Gakken's "1 year of learning" to "6 years of learning" magazines.
Since it came from a different dimension, the everyday gag manga that depicts the turmoil caused by Michiru-chan and Kanta-kun with the click of a "bully dog". Buku also plays an important role as a partner of Petit. The design is subtly different, but it is a character that is common with the two-person one. 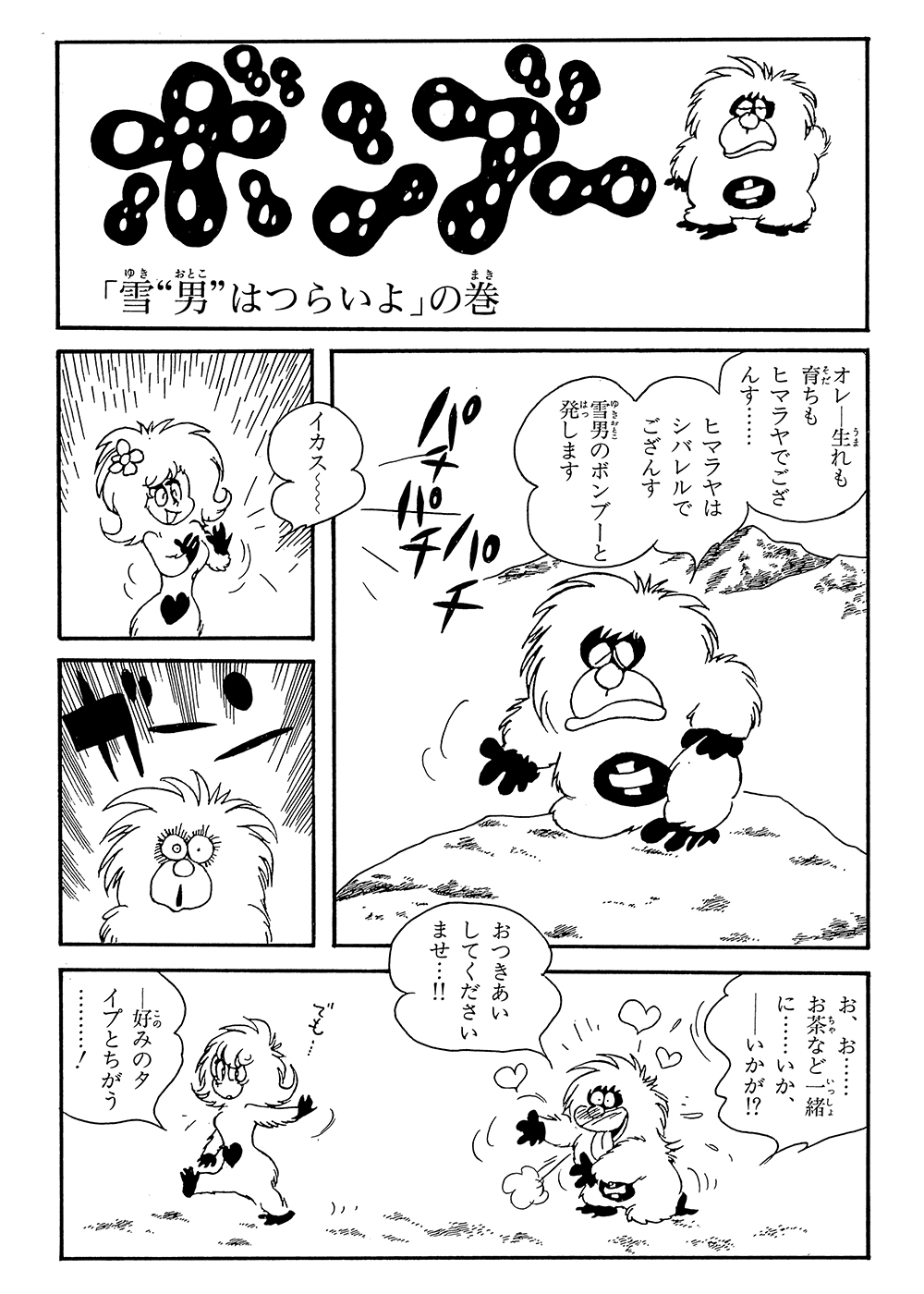 Around May 1975, it was drawn as a gum character for Kanebo Foods and appeared in magazines such as "Shonen Magazine", "Shonen Sunday" and "Shonen Champion". I don't know if I can put it in animals ... but I'll introduce Yukio's Bamboo because the character design and the friendly personality are lovely!
Included in the complete work "Underwater 30,000 miles".