Introducing the transition of the illustration touch of Cyborg 009 that has been drawn for over 30 years. 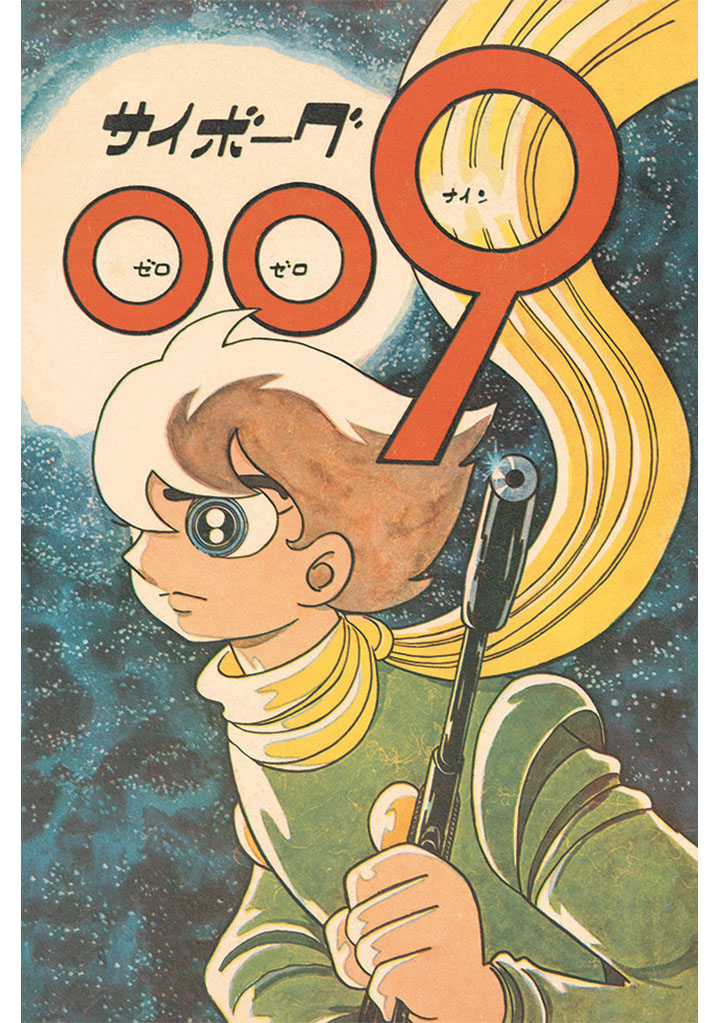 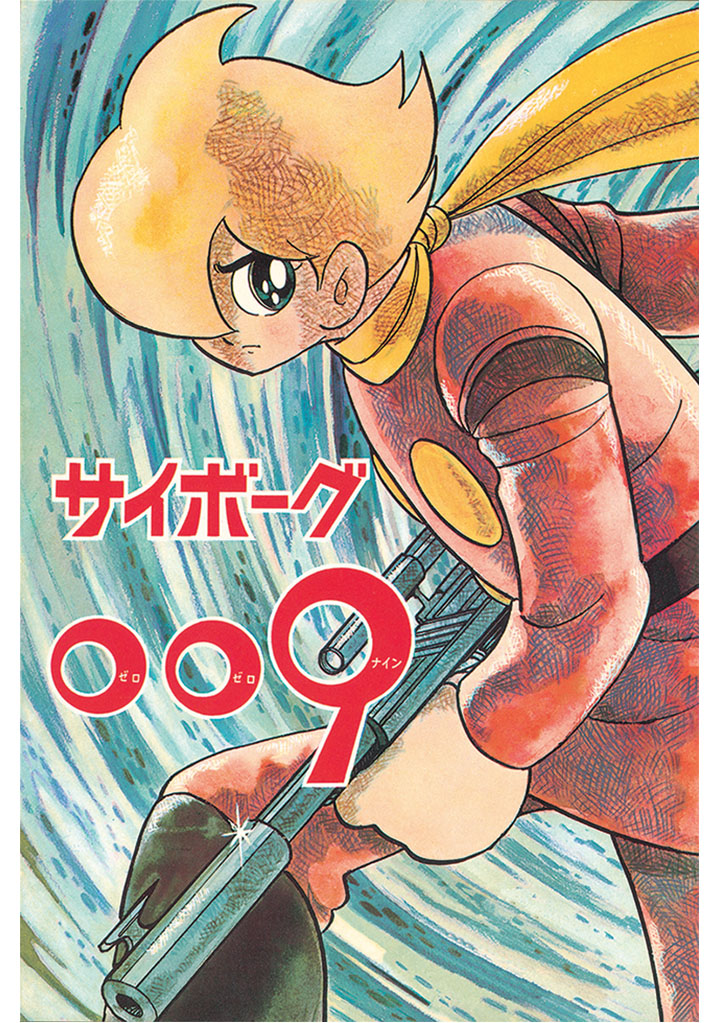 [First term: 1964-1967]
It looks like a boy's manga, and the main character, 009, is also drawn like a child, and at the time of serialization, the color of clothes was sometimes green. 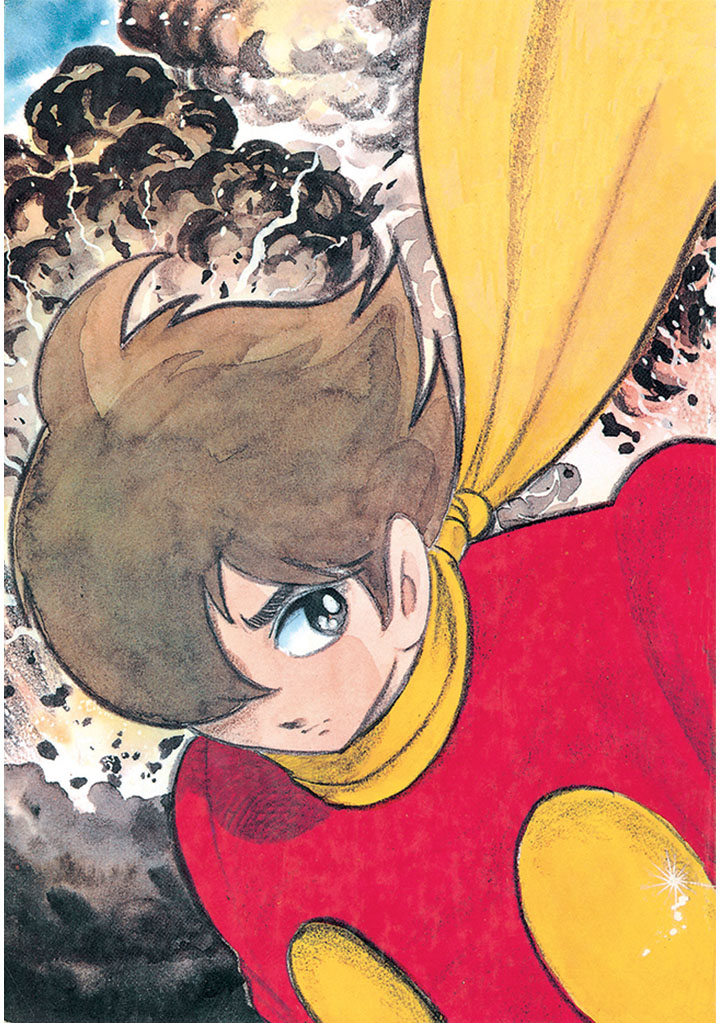 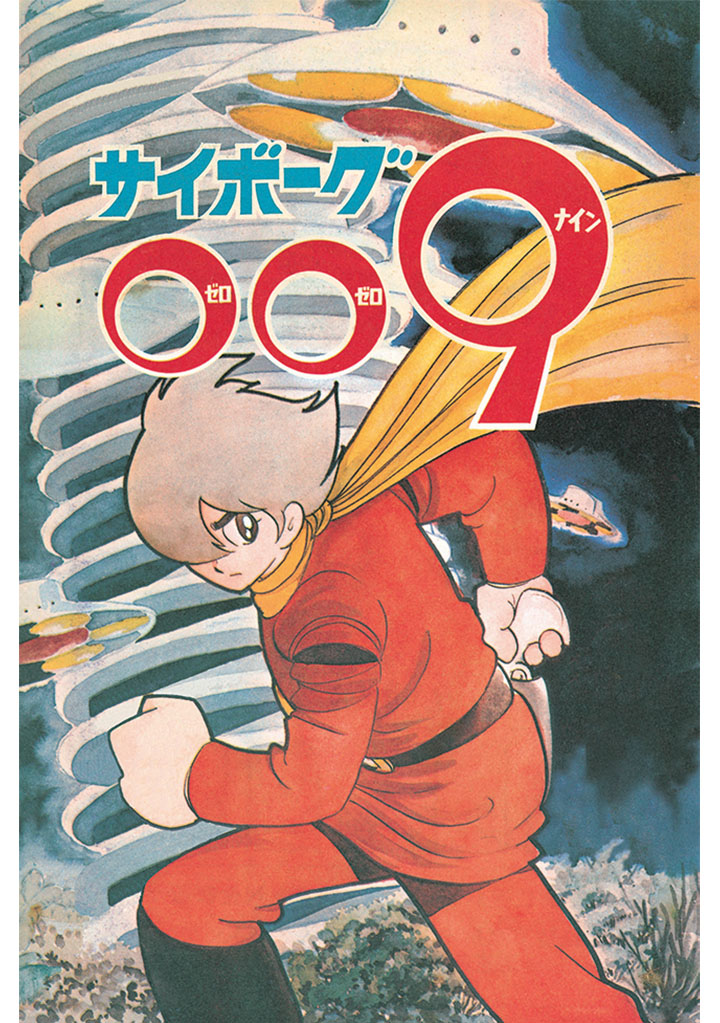 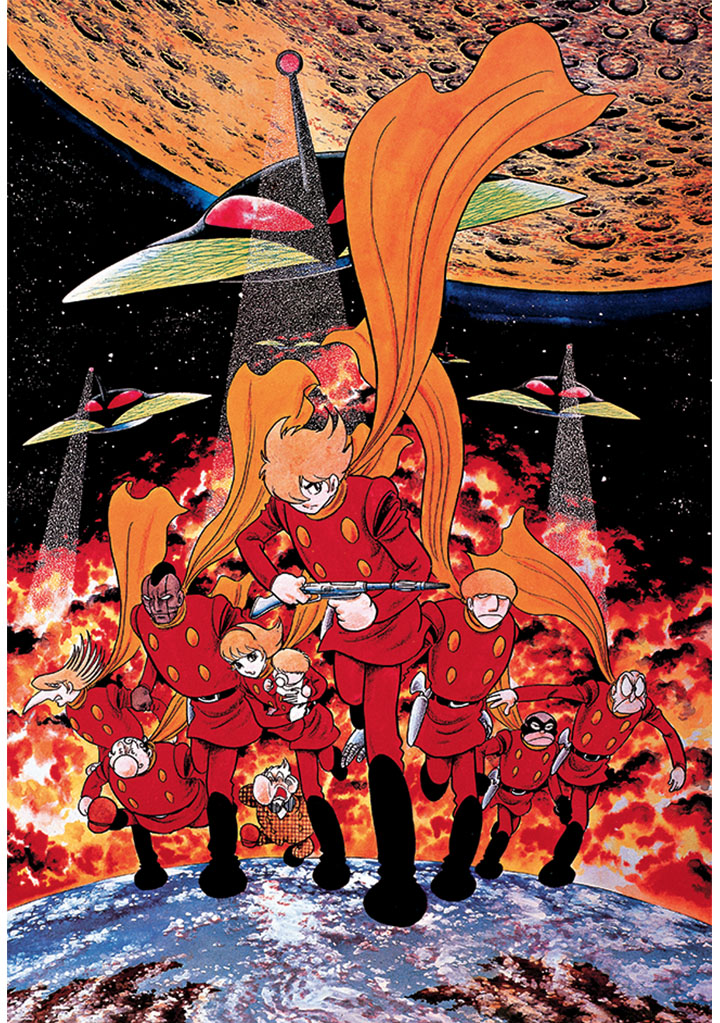 [Mid-term: 1967-1974]
It was the time when Ishinomori himself opened up the opportunity to publish works from boy comics to youth comics. Perhaps because of such a background, there are also a lot of adult character depictions. 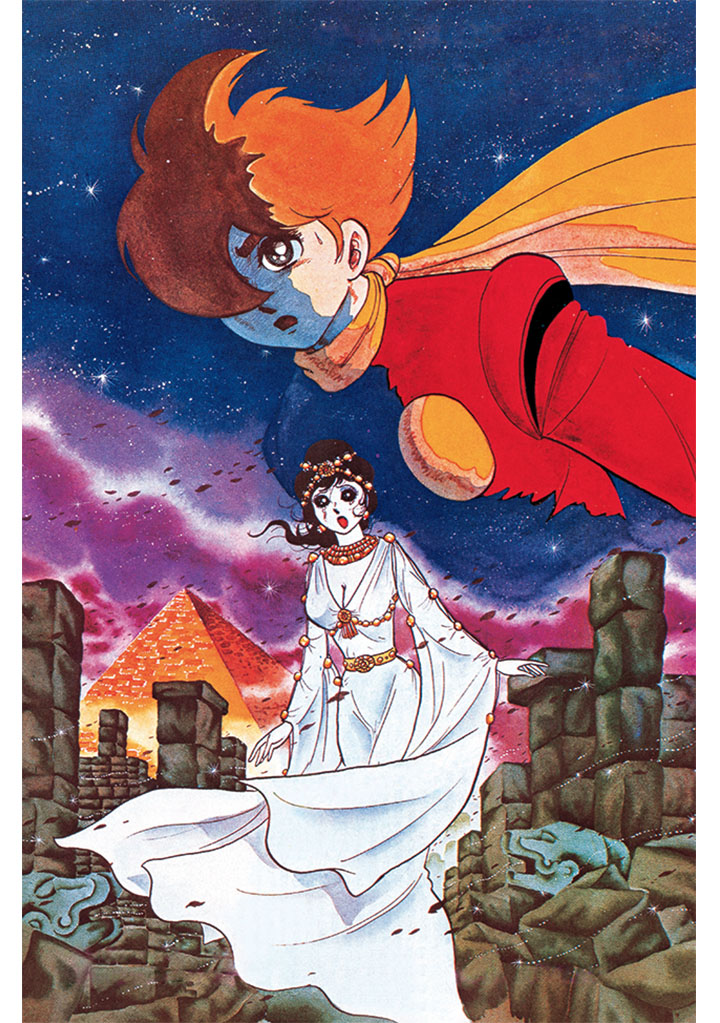 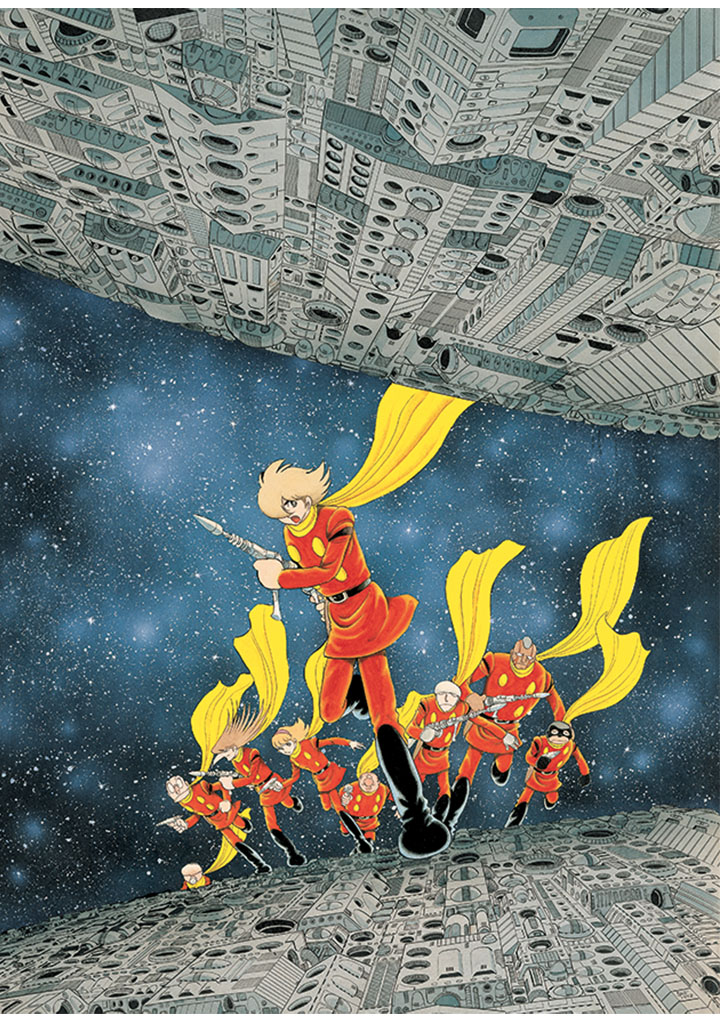 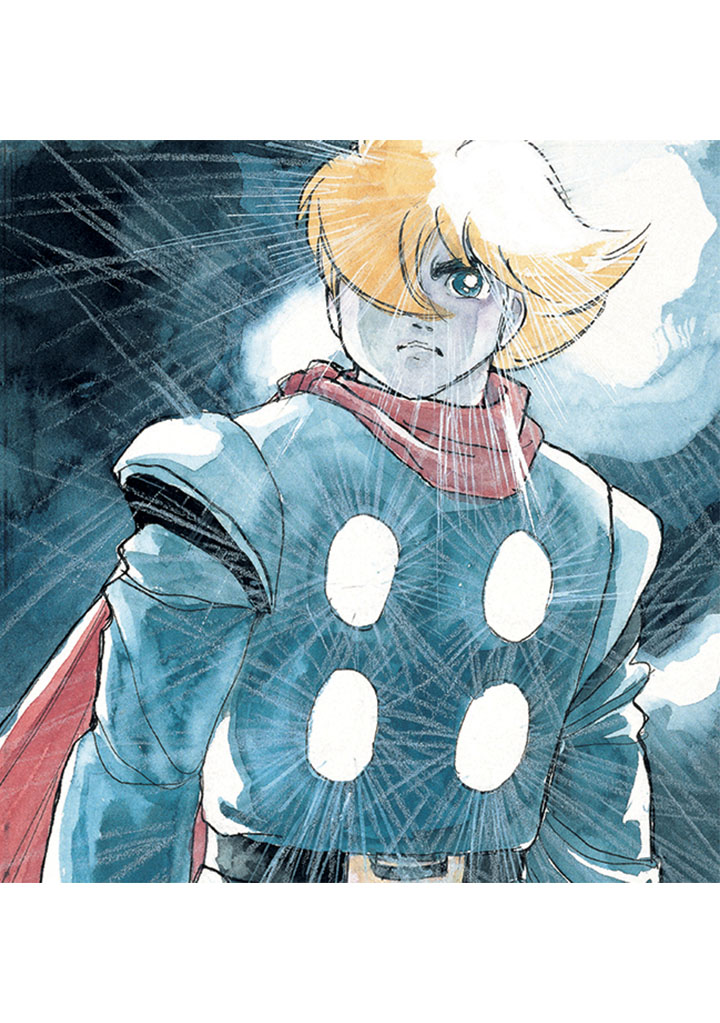 [Late: 1975-1997]
Cyborg 009 was drawn with various touches and methods from the time when Cyborg 009 was doing various developments at the time, such as the resumption of serialization of manga, TV animation broadcast, theater version, etc. 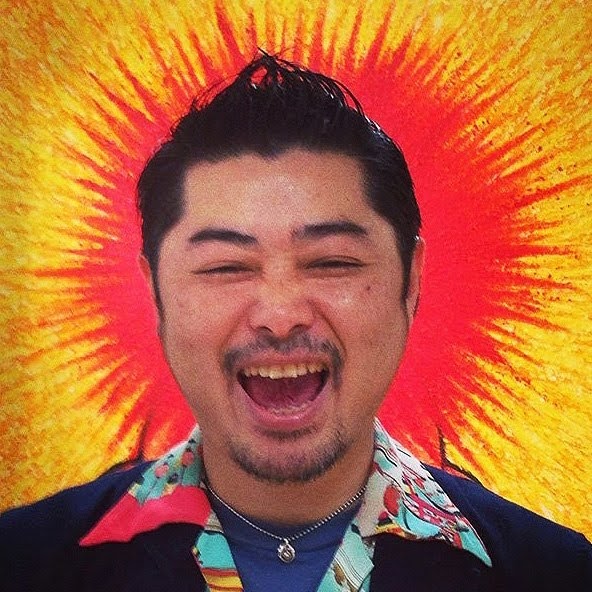 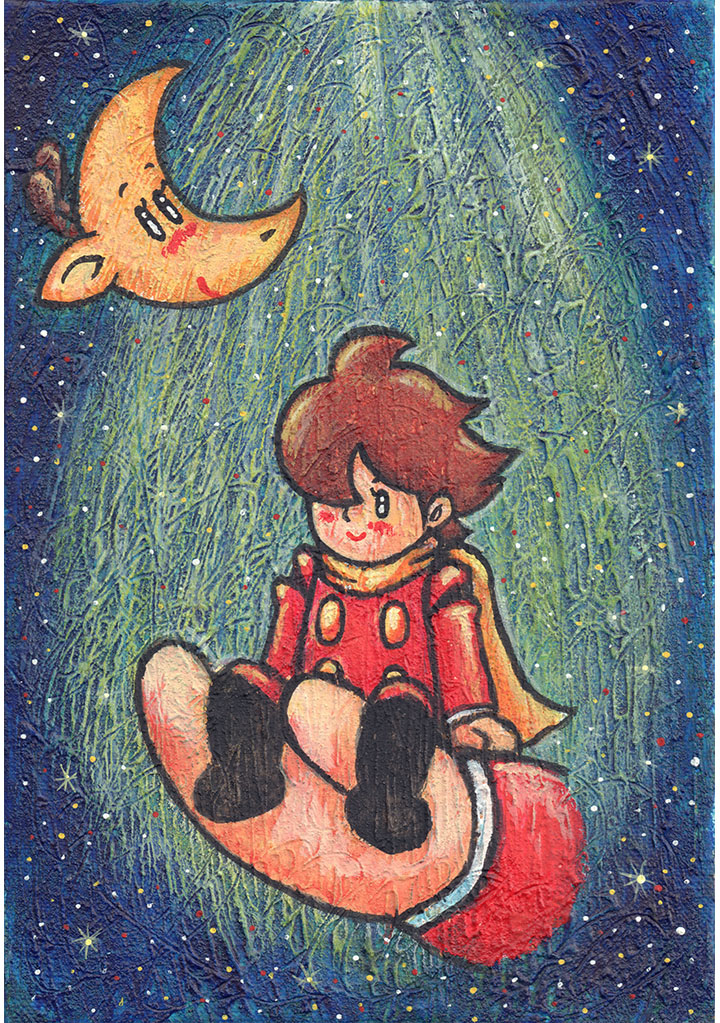 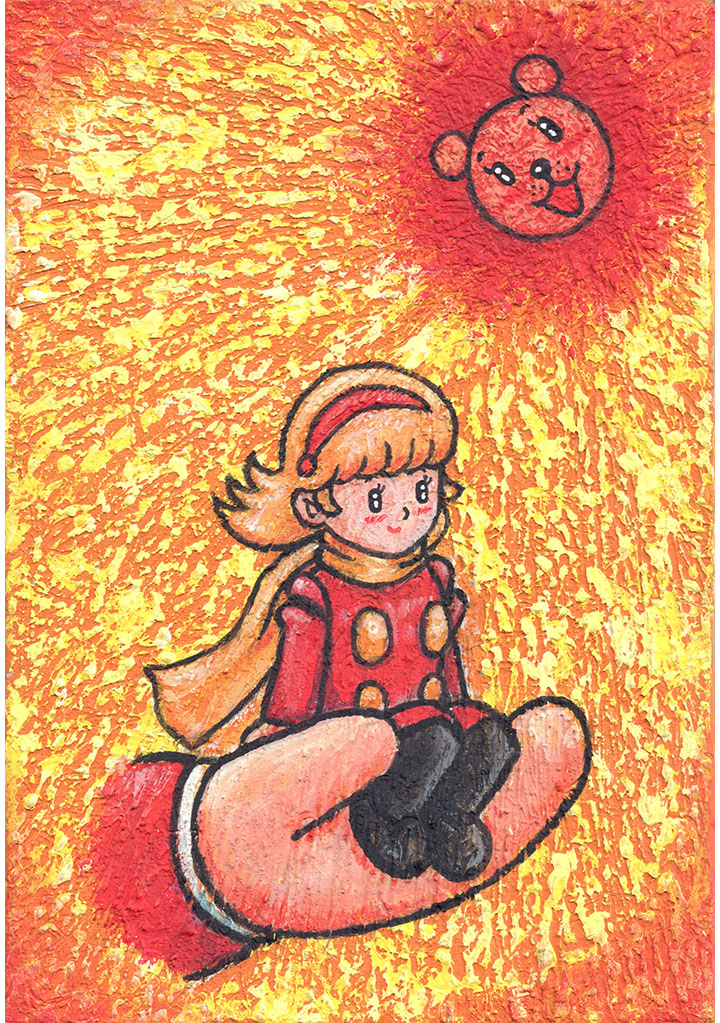 Because it was a generation that grew up in Manno Ishinomori,
Fun came before anxiety.

Start from an encounter in your hometown

Tamori Pro (hereinafter referred to as “Professor”): Could you tell us how you decided to do this redesign (creating with the taste of the artist), and how did you do that?

Akira Tokuji (Toku): In 2018, an exhibition was held in Noboru City, Miyagi Prefecture, the hometown of Shotaro Hinomori. It was very well received by a professional professional at the time when I visited the Shotaro Kanomori Hometown Memorial Museum, and it was very well received, so I would like you to see a children's drawing of the Kanomori characters of my touch. That's why I drew “Nori Nori 009” and watched it by Kamori Pro immediately after I returned to my hometown of Osaka.

F: What did you think when you first heard about redesigning the "009"?

The image of "Yin" dares the hero

F: What kind of interaction did the parties involved have in the production?

Tak: The professionals of Omori had a great understanding of my work and worldview, and they said that I wanted to see something that wasn't just deformed, so there was pressure, but it was deeper and more self-evident. I took care not to lose it.

F: What were the difficult points in the actual production process? On the other hand, is there anything that makes you feel better than you expected?

Tak: 009, Joe Shimamura is the main character, but he has a somewhat lonely face, so I really thought about what I should do to avoid losing that atmosphere. As a result, the protagonist tends to be expressed as "yang," "daytime," and "sun," but I intentionally expressed it as "yin," "night," and "day." On the other hand, I chose 003 for Francoise Arnoules, so I think it was good as a result.

The motivation of the teacher to create

F: Do you have a favorite piece of Hinomori's work? Please tell us about your chances of encountering the work and your favorite points.

Tak: I liked "The Planet of the Planet". In the old days, it was difficult for me to get past pictures, so it was a day to go to a secondhand bookstore. So I remember buying it as a set. For the first time, I learned about the unfamiliar world of parallel world with this painting. Also, in recent years, when I saw the original exhibition of "Jun", I was once again overwhelmed by the world view and ideas, and my motivation for production came back. 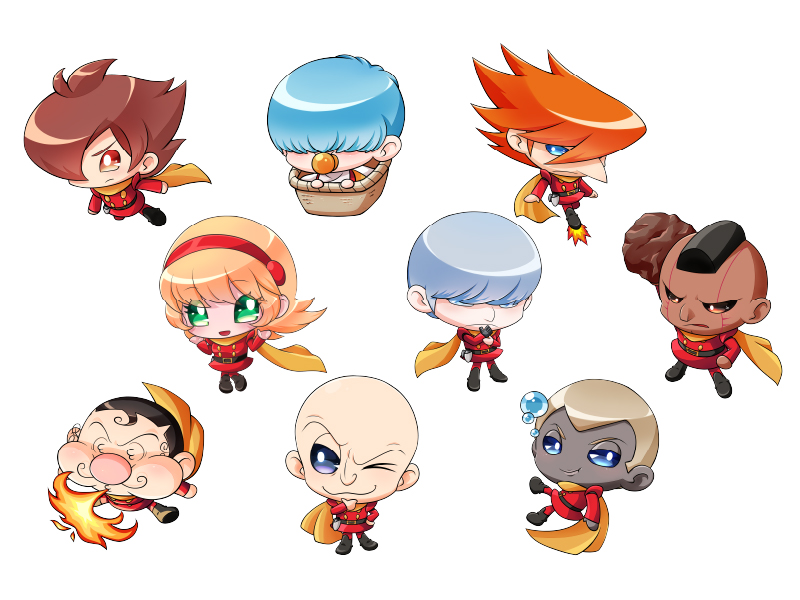 Francoise-chan is my favorite.
Ivan is definitely a good guy when he grows up (laughs).

What a variety team!

Ishimori Pro (stone): Could you tell us how you decided to do this redesign (drawing with the taste of the artist), and how did that happen?

Aijie (henceforth a): I was not able to see it in real-time for generations as I practiced how to apply it to my own design during the development of merchandise at the company (METALBOX). 70 I drew a variety of characters from east to west, including works from the 1980s.
At that time, why not draw the Cyborg 009? Said the senior planning and development department.
I was ashamed to have never seen the original story, but when I was a kid, I had seen the anime "Cyborg 009 THE CYBORG SOLDIER" several times, so I was very interested and would love to try it! I thought.

Ishi: What did you think of when you first heard about redesigning the “009”?

A: In redesigning, I got the chance to investigate various things about "Cyborg 009".
I was worried because I didn't have much memory of the images that I should have seen in real time and I did not know the work deeply, but when I reviewed the materials and design, the main characters, Zero Zero Number Cyborg, were cool people, cute people, funny people. (?) And so on, the design range is wide, and there are various ages and races, so it's a team full of variety (laughs).
Shotaro Ishinomori was again surprised that such a manga was published over 50 years ago.

Ishi: What kind of interaction did you have in your company in designing?

A: Originally, I was good at drawing fluffy animals, but I hadn't had many chances to draw different figures.
I drew a rough sketch with my design, and it was a repetition of how to fix the character of the character and how to make it look more similar to the character.
It looks the same as it looks, but I think that I could have made it a little like 009 while I was taught by someone who was familiar with the character's background and personality.

Ishi: What were the difficult points in the actual production process?

A: After all, how to draw the character and the face is completely different from the characters in the manga and anime main part, but it was difficult to decide how much to leave the character's atmosphere.
Personally, I think Francoise had the hardest time.
It's a charming character that makes you feel like you're a cute and fragile girl with just one red, but you have a strong will and sometimes motherhood.
I was told to deform it, so how? I thought (laugh)

Ishi: On the other hand, is there anything that makes you feel better than you expected?

A: I thought it would be the most difficult thing, but Jeronimo and Punma were unexpectedly easy to deliver because they matched their designs and were easy to draw.
I was able to draw with a little bit of knuckle and draw a fish next to the punma.
I erased it because my senior told me that I needed only a character (laughs)

"A living person" in the work

Ishi: Do you have a favorite work from Ishinomori?
Please tell us about your chances of encountering the work and your favorite points.

A: After all, I like Cyborg 009.
I like the fact that there are many individual episodes for each.
The character's life becomes deeper and more emotional.
Also, as a story, not only the confrontation of pure justice and evil but also the story of exercising the power gained in the evil organization for humanity and justice, I feel the strength of human heart or drama. ..
I think it has something in common with Kamen Rider and Android Kikaider, which is Professor Shotaro Ishinomori.

A: Not because I had a hard time, but the first one is Francoise.
As I repainted it many times, I became more and more attached to it.
In practice, I even drew some patterns for Francoise-chan with three head proportions.
And Ivan. I'm a baby, but I'm sure it's good looking to grow up (laughs)
Then Helena! I haven't been given the opportunity to draw at work, but I'm a hobbyist character!

Ishi: Did this change your impression of Ishinomori's character among Aijie?

A: The work drawn by Shotaro Ishinomori was an image of "a strong hero who fights evil."
This time, I had the opportunity to draw the character of Cyborg 009, and to know that I was a hero who suffered and struggled while reading and examining various works for me. Meaning It's not just a very human character, or a character made up of justice just made, but I've come to feel that it's a living person in the work.

Be sure to have Helena and Apollon's brother and sister (laughs)

Ishi: The response, reaction, and reputation when announcing the product design
Did you see, hear, or feel anything about Aiji?

A: Cyborg 009 is a work that fans have continued to love for more than 50 years, and I was a little worried that it would accept the deformed illustrations I arranged.
I'm relieved to hear that a lot of people are picking up merchandise at events held in Osaka and Tokyo last year and at Ishinomori Mangakan.
I also heard that you are receiving support from SNS etc.
I think it was really nice to draw the characters of Cyborg 009.
I would like to continue drawing various facial expressions and poses of the deformed Petit Cyborgs.

Ishi: Please tell us about the characters and items you want to commercialize in the Ishinomori work in the future.

A: First of all, I would love to draw Helena and Apollon's siblings!
Please! Let me draw! (Lol)
There are some works that I myself have not studied yet and I do not know yet.
Let's read more of Shotaro Ishinomori's works and commercialize this character! I would like to make more and more proposals at company planning meetings.

● Aiji Profile
Since 2017, he has belonged to METALBOX Co., Ltd.
Participated as an illustrator in the company's planning and development department while performing activities as an individual writer.